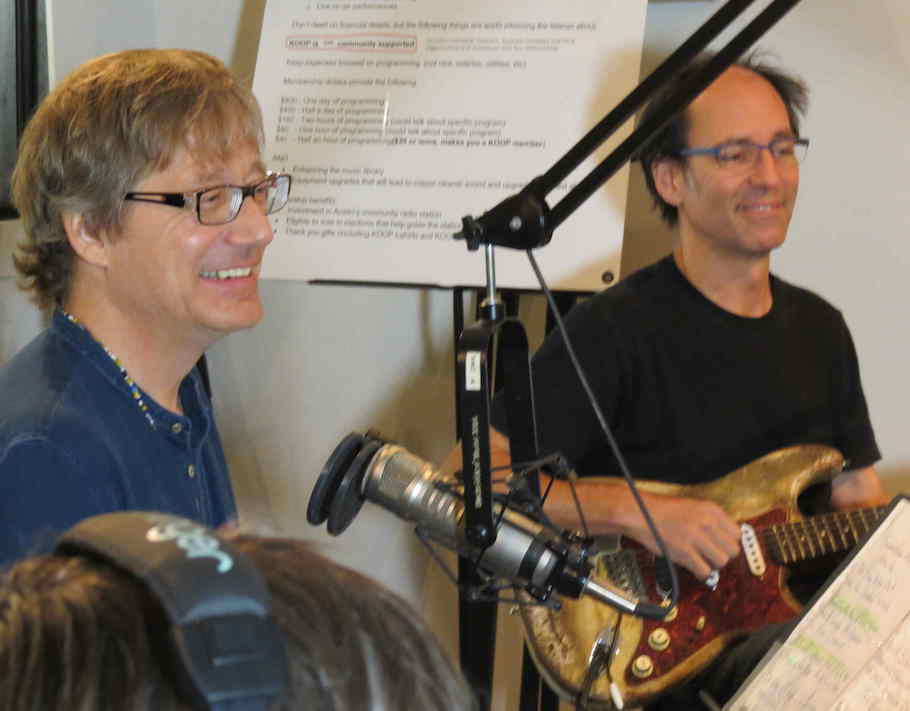 Thorne Dreyer's guest on Rag Radio is singer, songwriter, and percussionist John Bush, joined in performance by guitarist Landis Armstrong. John Bush, who performs with the John Bush Band and other groups, is a multi-instrumentalist specializing in drums and percussion. Besides being an original member of the platinum-selling band, Edie Brickell & New Bohemians, Bush has played with Texas Music Hall of Famers Greezy Wheels, and has worked with many national and regional acts including Ian McLagan, Spin Doctors, Blues Traveler, Critters Buggin, Ruthie Foster, and more. Bush is also a songwriter and has released four CDs of original music and has recorded and produced many Texas greats including David Garza, Redd Volkaert, Bubba Hernandez, Paula Nelson, and more. Bush will also talk about the work of the SIMS foundation, an Austin organization that helps musicians with mental health needs, and Austin's Candlelight Ranch, a nonprofit organization that helps kids at risk and with special needs and their families to enjoy fun and healing in the outdoors. Above: John Bush, left, and Landis Armstrong on Rag Radio, Sept. 6, 2019. Photo by Roger Baker / Rag Radio.
Rag Radio is produced in the studios of KOOP 91.7-FM, an all-volunteer, cooperatively-run, solar powered community radio station in Austin, Texas, in association with The Rag Blog and the New Journalism Project, a Texas 501(c)(3) nonprofit. It is streamed live on the Internet at KOOP.org and Radio Free America. The host and producer of Rag Radio, Thorne Dreyer, is a prominent Austin-based activist and writer who was a pioneer of the ’60s underground press movement. The show’s engineer and co-producer is Tracey Schulz and the staff photographer is Roger Baker; Suzy Shelor is Rag Radio associate; Alice Embree is guest host; Glenn Smith and Roy Casagranda are our political analysts, and Evan Hearn is the Rag Radio apprentice. The syndicated show is broadcast (and streamed) live Fridays, 2-3 p.m. Central) on KOOP, and is later rebroadcast and streamed on WFTE-FM in Mt. Cobb and Scranton, PA., on Houston Pacifica's KPFT HD-3 90.1, by KKRN, 88.5-FM in Round Mountain,  CA, and at WALHRadio.com in Wilmington, OH -- and as a featured podcast at Veterans Today. Learn more about Rag Radio here.
Running time: 40:15 (without Membership Drive pitching); 55:39 (with pitching)
Contact:  ragradio@koop.org.